WHAT ARE BOTTLE SCHOOLS

To make eco-bricks, community members collect plastic soda bottles and stuff them full of inorganic trash such as plastic bags, chip packets and polystyrene, until the bottles are hard like bricks.

Bottle schools are built using tried and tested post and beam construction, with strong foundations and concrete columns and beams reinforced with iron.

The difference with traditional post and beam construction is that instead of the walls being filled with cinder-blocks or bricks, the walls are filled with eco-bricks. The frame (columns and beams) of the building provide the structural integrity, while the bottles act as filler (insulation) in the walls. Cement stucco on both sides of the walls means that from the outside, you can’t even tell that the walls are made of eco-bricks.

Bottle schools are an efficient and environmentally-conscious way to help fill the need for educational infrastructure that exists in many countries. Reusing plastic waste to build bottle schools cleans the community of trash, and in the process educates youth about the environmental impact of non-biodegradable waste.

Above all, bottle schools are a community effort. It would be very difficult for one person to collect 6,500 bottles and over two tons of trash to build a school. A community, working together, can achieve this. 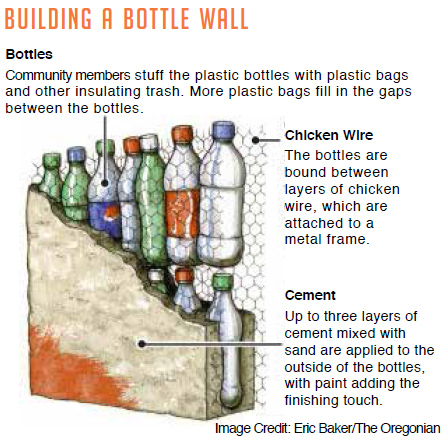